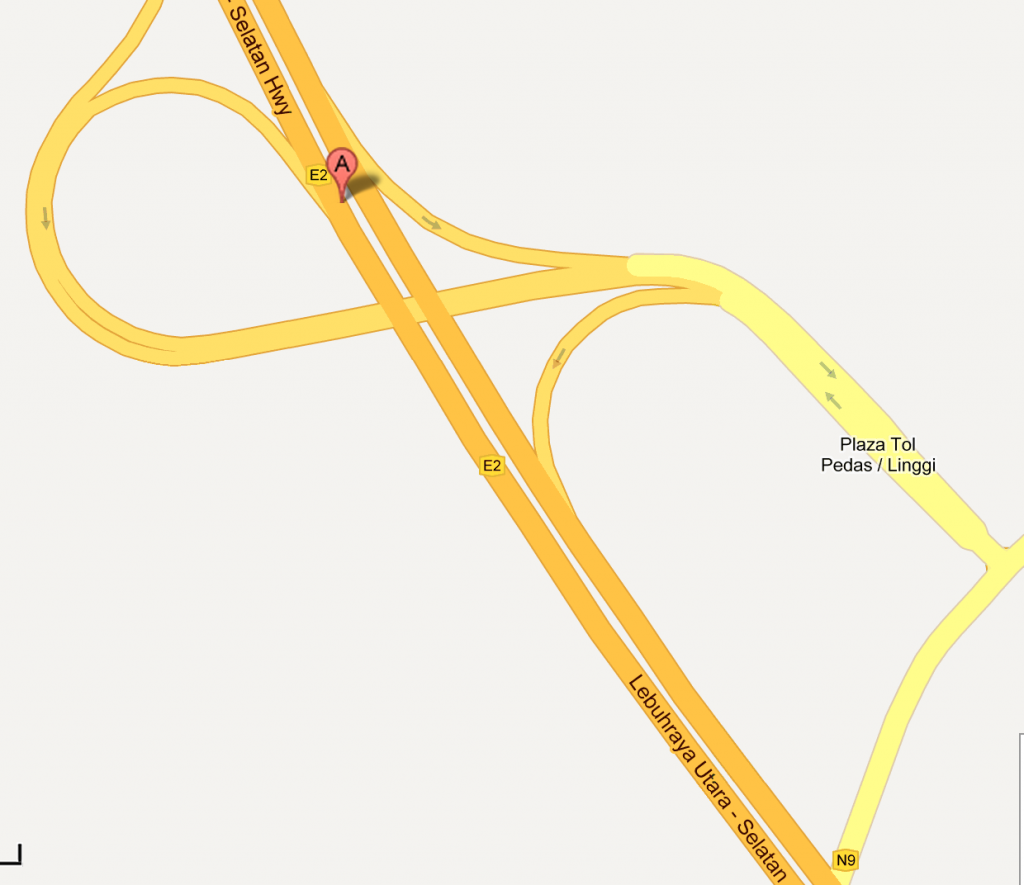 Well I did not got into any accidents – its more of accidentally reach a point where I did not plan. Quite an interesting trip indeed. Yesterday (Saturday) – I woke up quite early, about 4am to be exact. It’s one of those morning where I wanted to sleep in but ended up waking up much earlier than normal. Deedaa deeedaaa.. cutting things short, I ended up gearing up at 6.30am and got myself ready togo.

A week a go, I went to Segamat for an udang galah trip, a trip which I didn’t plan, but decided to wake up in the morning and head over to the RV point together with other kakis. What I discovered was the road at the exit of Pedas Linggi was awesome.

At the exit, it goes down to N9 – which is a state road that goes all the way to N5, another states road. I must say both roads are just awesome.

Anyway – after leaving home, towards in the middle of Penchala Link, I was really really hungry! Guess, the light dinner the night before did not help at all. Really need to feed myself! So first stop, I decided to stop at Starbucks along PLUS highway near Serdang exit.

Obviously – Starbucks was empty. It was very early indeed. I think the time was something like 7am. Ordered some food and low fat latte, and nom-nom till my tummy is quite loaded!

He he….  happily taking up most of the space on the table 🙂

After that I straight away zoom to Pedas Linggi exit, and hit N9 and then stopped at a Kedai Kopi. Didn’t managed to take picture. Was more focussed in drinking my kopi O kosong. Then it hit me! I needed to go toilet. The lady at the stall told me no toilet, obviously because the stall was just outside her house, and of course she would not let me in to poo poo!! She point me to the nearest mosque, but as I rode there, the mosque was locked. So had to key in to my GPS, on where’s the nearest petrol station. It was about 7km away. Ok – no issue. Very near…

The petrol station was on N5, and I fuel up and went to the toilet.

The toilet was surprisingly clean, but it was a squatting toilet. I spent more time trying to remove the gear than the actual action. Excuse my detail! Ha ha. But anyway .. after getting back on N5, I realised that Malacca was just about 40km away. Oolalala.. I immediately key in the GPS to head over to Malacca. Not far indeed. And as mentioned the roads was just awesome. Not packed at all for a Saturday morning. I think, there were only 1 lorry throughout my journey. Very happy. I had overtaking lorry.. really!

On and on.. then I reached Malacca. Ok… there’s when the action starts. The problem with Malacca is that Jonker Walk i a super tourist lane. Almost impossible to park! But after trying few places, I managed to park near Geographic Cafe 🙂 What else.. have a coffee lah… It was such a hot day.

Ice Coffee never tasted good – in the hot hot HOT day. I think it was going to be 40 degrees. Geeze. But all is good. After coffee, I rode my bike and left for home using PLUS highway. It was smooth, but I did stop at Senawang rest area as I needed some rehydration and rest. Am trying to push myself for a quick stop every 100km or so, so that I don’t get tired and start to lose focus. It’s extremely important to be focus when I am on the bike… like super super duper rooper important!

Anyway – till next week 🙂