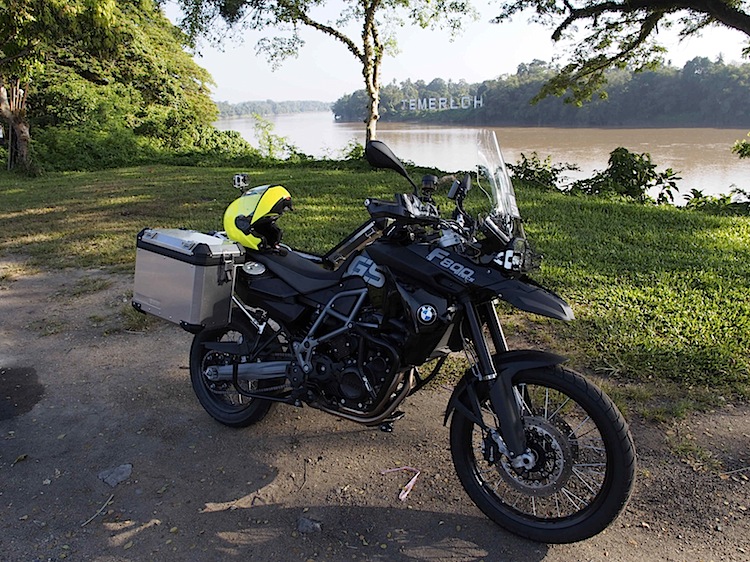 Today, since it’s public holiday in KL – I decided to do a long tour, off to three different states (Selangor, Pahang and Negeri Sembilan). The route chosen like playing dart, but what I was certain was to head to Negeri Sembilan from Karak. Not knowing what lies there…. But it’s ok, it’s for the fun of it. Putting some music, newly washed riding gear… and empty stomach, I head for the solo journey.

The route is shown below… feel free to download if you want to do the route yourself. Be careful at the Felda area after Bera – the roads can be quite dangerous as it’s not the best road out there. Don’t be fooled by the nicely paved sections!

Enjoying the calming scenery at Karak

Can’t complain about the sky! Blue…..

I did a stop over at Durian Tawar for breakfast and toilet break. Seriously, I was really hungry!

The nasi lemak (yes it’s unhealthy) is awesome. Not sure because I was hungry or it’s just awesome…

The road at the Felda Triang (i think) along Route 1579, its nice and calm. But don’t be fooled by the nice paved road as mentioned earlier. It’s filled with potholes. I slipped few times and hit the potholes at least twice. All is good… 🙂

Along Route 1579, I cross over from Pahang to Negeri Sembilan..

At the end of the route, right before the turning to Road 11, there’s a police checkpoint.. Chilled out with the police. Nice chap..

At the junction of Route 11 and Route 19, I decided to have a quick drink break. Air tebu never tasted so good!

The journey goes on and on.. this was the view along route N19 and the view was awesome..

How can i miss this shot…

Did a quick stop at Pertang. Something wrong with the GoPro.. damn it.. Maybe it was too hot.

This was on Route 86. Can’t complain about the road and the weather!

This is toward the middle of Klawang, heading to Sg Lui. The road to Tekali is closed due to landslide..