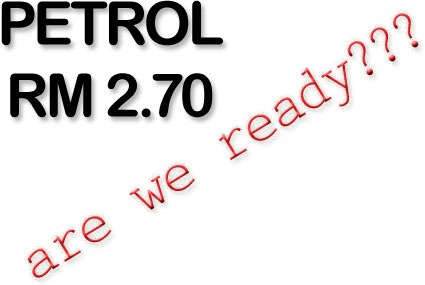 Petrol to cost more about RM2.70 starting from today, 5th June 2008. Are we really ready to go through this huge price increase. You talking about more 78 cents increase of 40% from the previous price of RM1.92. And worst is not over – based on my understanding the subsidy for petrol increase will be removed in August 2008. The whole country will be subjected to the market price for fuel.

Seriously, I do understand the extend of the problem that the country is facing, with rising fuel cost – and commitment to provide subsidy for the fuel, which has provided stability to a lot of things in the country for many many years, has start to bite them.

I think, most of the urbanites would have known that the fuel price increase is inevitable. Day by day, we heard the news of the fuel price going up over and over again.

We are prepared to braced to the challenge of rising fuel cost – which indirectly cause the rise of other prices like food, drinks and services. But, seriously 40% direct increase will really hurt a lot of people. I myself, gonna start paying something in the region of a RM150-170 for a full tank of petrol! I can’t imagine how those ppl who are earning in the region of Rm1500 a month, with 3 kids in the household would be able to survive such striking increase in petrol prices.

I would think the government should have increase the fuel prices gradually, in the range of 10% every 3 months for the next 30 months – in moving towards using global market price for the fuel prices in Malaysia. At least, the citizens of Malaysia would be able to prepare for the worst, and start moving to alternative way of transport such as walking, climbing and cycling… :p

Guess, with the election being last March, that doesn’t really help the government in putting the right strategy in preparing the rakyat for the increase. Fuel prices has always been a problem with the government – any increase will create political risk to whoever running the show. Even a slight increase of 10% would definitely cost trouble. Thus – running up to the election, government is “forced” to not change the prices, and absorbs the fluctuations and increase of fuel prices. Am sure the government will start moving to deficit with such!

And guess, up to yesterday – the government won’t be able to handle it anymore. They just had to do it.. Otherwise, budget presentation in August would be “really” fun – considering the mix in the parliament that we have.

Anyway – are we in recession yet?