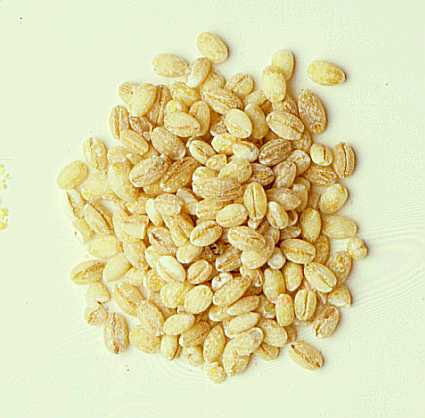 Just read this this morning

Increased Control of Cholesterol and Glucose with Barley Consumption

Research conducted in Canada, the United States, and Australia has shown that components in barley play an important role in lowering blood cholesterol in hypercholesterolemic subjects. As well, in a small Canadian study at the University of Alberta, non-insulin dependent diabetics (Type 2) had improved blood glucose levels as a result of including barley in their diet in place of wheat products. It is believed that the soluble fibre and other components in barley are the key reasons for the positive effects.

Fibre
Unlike wheat, barley is a good source of both soluble and insoluble fibre. At a time when consumers are being encouraged to increase fibre and grain intake, barley foods or barley components added to other foods are a useful way to meet nutritional goals.

One of the theories for the cholesterol-lowering effect is that the soluble fibre becomes viscous (gummy) in the intestinal tract, thus interfering with the absorption of dietary cholesterol and fat.

Tocotrienols
Barley has high concentrations of tocotrienols, compounds which act as antioxidants, and are capable of reducing serum LDL-cholesterol (one of the risk factors in cardiovascular disease). Tocotrienols act by repressing the activity of the first rate-limiting enzyme (HMG-CoA Reductase) in the liver, thus reducing cholesterol synthesis.

Beta-glucan
Beta-glucans are carbohydrates distributed throughout the grain, with slightly higher concentrations in the outer layers of the kernel. It is believed that these carbohydrates are largely responsible for the regulation of glucose and serum cholesterol reduction in hypercholesterolemic subjects.

Barley is available in many forms: flour, flakes, pot and pearl barley, and the whole hulless grain. It is easily added to the diet by baking with it, adding it to casseroles and soups, and using in porridge. It is an extremely versatile and healthful grain.

Barley has been used as a human food for thousands of years. Only in the last decade, however, have the benefits of food applications become more evident. Hulless varieties have made barley food use more attractive than before because the weak attachment of the hull to the seed kernel allows the hull to be easily removed during harvesting (similar to wheat). The nutritional and functional characteristics make barley appealing to the consumer and food processor. Further research and development on new barley products and incorporating barley components into food products is ongoing.

Source from http://www.albertabarley.com/food/research.shtml
Wiki It

He he.. Time to boil barley now!