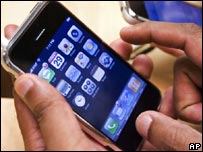 Very interesting indeed, have a read at:

Press reports said that O2 is set to sign an exclusive contract shortly and should have the new phones on sale in time for Christmas.

A spokesman for O2, which is owned by Spain’s Telefonica, declined to comment on the reports.

More than 500,000 iPhones were sold in the first weekend in the US by AT&T, which has exclusive rights there.

Vodafone had previously been tipped as the likely winner of the contract.

The agreement with O2 is reported to include Apple receiving a continuing share of the revenue generated for the network operator.

The handsets are expected to be sold for about £300 and O2 will be hoping that the lure of the fashionable phone is enough to win customers from rival networks.

I wonder who will get the iphone contract in Malaysia. I have the feeling that it would be Celcom, but then again, we don’t even have Itunes store to start with, how the hell are we going to get any IPhone. Crap crap crap 🙁